Pregnancy is marked by major hormonal changes. This is perhaps the reason why your whole body is affected as a result of pregnancy, and the effects of the same continue to show their mark even after childbirth. It is a well known fact that the body’s system that is affected the most by this is the skin. In order to nullify the effects of pregnancy on your skin and get a moisturized, clear and healthy skin, it is important to make some changes in your routine. 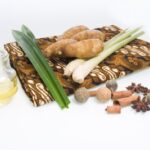 A perfect example of one such treatment is the “minyak urut”. This treatment method was used by the Arabs who used to heal oil along with camel fat to enhance the heating property of the oil. However, with time, the use of camel fat has been reduced. Herbal replacements of the camel fat are black pepper, ginger, garlic and onion. Although, the components have changed, the concept is still the same.

If you have a look at the available beauty treatments in the Malay culture, you will realize that they are actually family secrets that have been transferred from one generation to another. Moreover, these secrets were never used commercially. Another important facet of this arrangement is the losing interest of the younger generation in ancient medicine. Since, the modern generation does not show any interest in these remedies, the elder generation has little motivation to transfer this knowledge.

Internal beauty treatments used in the Malay culture includes drinks like the herbal tea, which enhances the overall health of the human body. On the other hand, external beauty treatments are focused towards detoxifications and include the traditional herbal massage and other similar treatments.  In the Malay tradition, any woman who has just given birth to a child is asked to remain confined for a minimum period of 6 weeks. It is during this period that herbs, oils and spices are used to facilitate the healing and recovery process.

The postnatal treatments that are recommended as part of the traditional Malay culture fortifies their bodies and helps them recover in the shortest time possible. The use of these treatments ensures that the body gets the required nutrients and recovers at early as possible. Moreover, the fact that all the treatments are truly herbal eliminates the risks of any side-effects or unwanted issues that may arise, making traditional Malay treatments a preferred form of postnatal care.

How to Make Payment?